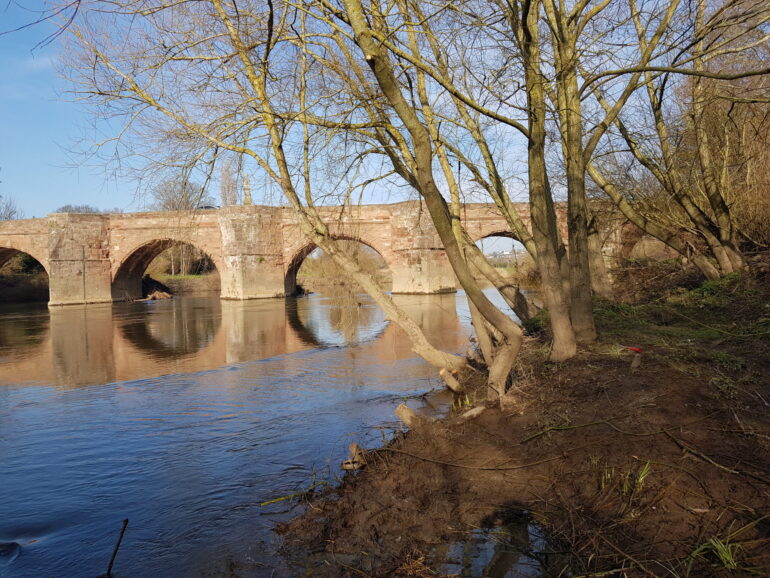 The middle sections of Ross AC’s waters include Lower Benhall on the right bank and the Town Water on the left bank. I have relied heavily in this post on the experience of Jon Daniels one of our older members with many salmon to his rod over the years including a 30lb fish in 2019. Jon is one of the few anglers the Club has with experience of fishing the Wye at Ross on Wye in the 1970’s and 1980’s.

Lower Benhall is only available to Ross AC Members whereas the Town Water is accessible to Members and coarse anglers fishing on Club Day Tickets. Both Lower Benhall and the Town Water hardly see a salmon angler ever, but there is a history of salmon being taken by Club Members in recent times and going back to the 1980’s, Lower Benhall actually had a 5 year average of 11 fish, so what happened?

Well both these waters were favoured as a handy salmon fishery with local anglers. In those times anglers were allowed to take fish for the table also they were allowed to fish for salmon with bait which is now banned with only spinning, and fly fishing now allowed on the Wye.

Taking these limitations into account there is no reason why current salmon fishing Members should not fish this water especially during the early months of the salmon fishing season which for the most part coincides with the coarse fishing closed season. I am hoping that when the new fishing platforms are erected in the Ross Riverside Park, hopefully March 2022, the salmon anglers might make good use of them especially during the coarse closed season. Wading is very limited in these sections with wading possible at the top of the stretch at “Playtime” and below Wilton Bridge at the bottom of these waters.

The Wye flows under Bridstow A40 Bridge at the top of this section. The water here is deep but soon shallows up and flows over a gravelled section which at 0.5 metres on the Ross gauge is only about 0.6 metres(2ft) deep. It is much frequented by tourists in the summer for paddling and stick fetching activities for dogs, this is reflected in the name of this catch, “Playtime”. I have fished “Playtime” myself on numerous occasions although my results have been disappointing. I tend to tack this catch onto my itinerary when I have fished Upper Benhall before returning to my car. The downside to this catch is the proximity to the Rowing Club and dog walkers on the lefthand bank so early and very late is by far the best approach.

From Playtime the water deepens as it passes Ross Rowing Club and the pool below down to the Hope and Anchor, the River shelving all the way from the righthand bank into deep holding water on the left bank, not easy to fish. It was always best fished from the right bank which unfortunately is now heavily tree lined and there is little access. It is good water.

As the Wye passes the Hope and Anchor the main channel returns to the right hand side of the River and runs away again from the right bank towards the canoe launch in a deep channel. This is the location of the catch named The Anchor for obvious reasons. Club members undertook extensive work at this location in 2019 to open up the bank for easy access. There is a sign on a tree indicating where Anchor is located.

At the canoe launch is the catch named “The Pipe” because of the old sewage pipe located here. In low water the pipe can clearly be seen. There is a deep hole below the launch, very snaggy, but good in low water when the disturbance caused by the pipe has diminished.  It was fished mainly with prawn in the 1980’s. Jon Daniels tells me that there is a shingle ridge in mid river for some 150 yds below the canoe launch, and at it’s down river end is a great catch and holding area, known as Wall 2.  Here fly fishing is a challenge, but bait cast upstream and allowed to drift across seems to work. Great care must be taken here as the banks are steep and slippery. It can be fished from right bank, but there is limited access from where you need to cast, again river shelves from right to left.

From here to the bend where there is located a lifebelt is not productive or accessible. The bend is best fished from the Town bank. Anglers must show caution as these banks can be dangerous when wet. In the 1970’s spinning with devon minnows was very effective in the top half of the pool. This catch is named the “Castle Run” after the nearby Wilton Castle.

From the lifebelt the water is relatively deep down to the old sandstone Wilton Bridge where it shallows again as it passes under the Bridge. Immediately downstream of the Bridge the bottom is a mixture of tackle eating sheet rock and gravel. Here, opposite the White Lion pub, is a short shallow but useful run over gravel, fish came from here in 2019 using a flying C cast upstream towards the Bridge. Worth a cast when the river height is around the 0.45 metre mark on the Ross gauge but not in low water as it is very shallow towards the bottom of the run.

Beyond that there is a very deep hole on our side of the River where there was once an island, here the Wye rushes over the upstream gravel bar from Wilton Bridge and into this deep near bank channel. It has to my knowledge never produced but it is worth one or two casts.

My records for Lower Benhall/ Town Water are very sketchy but I have a number of unconfirmed reports of salmon coming from these waters as well as the following;  Roy Jacobs landed a fish of about 7lb on a Rapala whilst fishing for perch in 2018 from the Town Water and a member fishing for coarse fish caught an 8lb fish on a pellet in 2015, Jon Daniels took a fish of about 8lb from Wilton Bridge in 2019, there are no doubt others unrecorded. Proof indeed that salmon do frequent these waters on their way up river to spawn.

As a matter of interest our current Chairman Rob Leather caught a monster of a trout weighing 8lb from Lower Benhall in 2018 whilst spinning for perch.