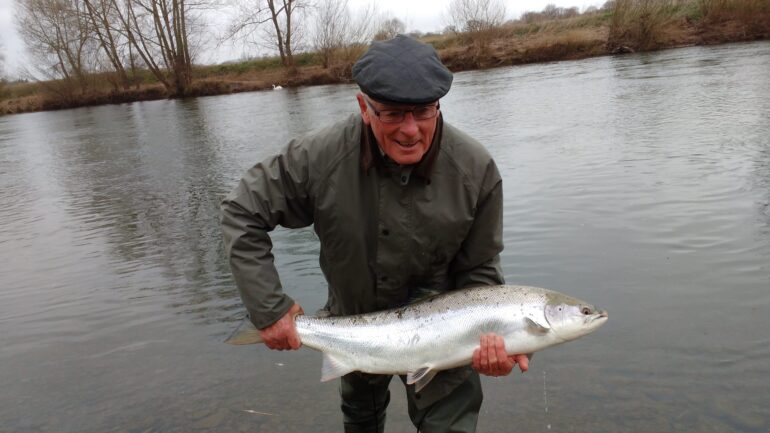 This is the first in a series of posts which seeks to tell Ross Angling Club members and those who would like to join our Club of the Salmon fishing available on our waters at Ross on Wye.

Many will know that the salmon fishing on the Wye is a shadow of its former self, but salmon fishing is cyclic, and catches do go up and down in succeeding years.  At the moment we are on a low, although  our waters still produce good fish in the right year to the angler who is single minded enough to  fish in the right location at the right time and using the right methods. Ross AC waters will be amongst the first waters to produce fish at the start of the season, very often fish in excess of 20lb. In 2016 our best recent year members caught 44 salmon and to show large fish still can be caught Jon Daniels had a hen of 30.5lb in 2019 from Weirend.

In putting these posts together I’ve sought the help of Richard Woodhouse.  Richard has fished for salmon for over 50 years and with 35 years experience on the Wye has been one of the more successful salmon anglers on the club’s waters since joining in 2015.   He now serves to represent the views of salmon members on the Ross AC Committee.

You will see names of the salmon catch locations  mentioned in the text which if you are a new member will soon become familiar to you.  The locations  of these romantically named catches  are detailed on maps in the Clubs Salmon Hut.  Some of these also signed on the bank, particularly on the Weirend section of our waters.

The salmon angling on Ross AC’s water is described by dividing into three main sections. Upper Benhall the most upstream part of Ross AC’s waters, Lower Benhall and the Town Water are the middle section waters and Weirend which is the official salmon fishery and the bottom stretch of water. However anglers are allowed to fish for salmon anywhere on Club waters during the salmon season 3rd March to 17th October.

Our salmon fishing at Ross is essentially a spring fishery and our catch returns bear this out, so members and those wishing to join are best advised to fish hard during the period March until early June spending as much of their time on the Wye when the waters are most productive. Some of the hot spots can be fished from the bank and we endeavour to trim bankside vegetation to maximise access early season.   The backend can also be productive depending on conditions.

Looking back in our records our waters start to produce fish at about 1 metre measured on the Environment Agency’s Ross gauge which is online for those who are interested. Our fishing is best when the Ross gauge drops below 0.6 metre and the best level for fish is 0.5 down to 0.4 metres as indicated by our records. Anglers can wade our waters in appropriate stretches from 0.5 metres and lower as indicated on the Ross gauge. The bottom is mainly gravel and a few large rocks but everyone must be aware of places where rock sheets suddenly end and the River is instantly deep as is the case at Hom Pil.

In the past members old and new have had the opportunity of getting a guided tour of the Waters in order to gain an intro into the access, carparks, Beats, salmon taking places and details of previous salmon caught and the methods used. These “Tours” were undertaken up until 2019 but Covid put paid to plans for the same in 2020 and 2021.

The intention is to do that again in 2022 on dates yet to be decided but likely to be around the start of the salmon season. Water levels drive the date of the Tour as it is pointless if the Wye is in flood because the important features in the River are hidden by the flood water. I also provide a texting service for members keeping them up to date with river conditions, catches on our waters and other pointers to our salmon fishing.

Upper Benhall at the upstream end of our waters consists of a deeper section just above the A40 Bridstow Bridge with mainly shallow runs and smaller pools above it. The stretch runs mainly in a north to south direction so anglers fishing downstream have the sun in their eyes from about 10am until perhaps 3pm. In salmon terms the most productive catch is The Wall which has produced the most salmon over the past few years. I’ve counted 24 salmon from the Wall in the years 2015 to 2021. It was here that Tom Rigby had a hen fish of 28lb in March 2015 on fly.

Katie’s, Kingfisher, Benhall Hut, The Oak and AC/DC have all produced fish during this period. I had my personal best salmon from Benhall hut, a fish of 26lb and Jon Daniels had his reel emptied of line when he hooked something very large and which he could not stop in 2015, the hut was taken down in 2019. My favourite stretch on Upper Benhall is the stretch from the bend at Logie down to the rapids above AC/DC, a very pleasant place to spend an evening in spring as the River is shaded by willows on the west bank which cuts out the evening sun. Strangely it’s not very productive for me as I’ve only had one fish from this stretch which came off at my feet, others have been more successful. The whole stretch can be waded once the River level is down to 0.5 metres or less. AC/DC is always worth a cast with 3 fish taken in the last 4 years. I’ve always thought that AC/DC has the potential to be a great catch but best I think to fish AC/DC early and late certainly in the last few years since the landowner on the other bank saw fit to clear the bushes and small trees from the high bank on that side and as it is also a busy public footpath the constant traffic and dogs etc must have an effect on the fishing. As the vegetation grows back the effects of the footpath will I think diminish.

Upper Benhall can be fished for the most part with both  fly and  spinner. The water is relatively shallow with lovely streamy sections with a depth of between about a metre to perhaps 2 metres. Stretches such as the Wall are deeper with average depth of 2 metres with holes rather deeper than that where the currents have swept out the gravel.

Spoons and spinners that have scored in recent seasons have been, Toby, Mors, Mepps and Devon minnow with occasional fish to Rapala and other plugs.

Successful flies where I have records are Bann Special, Usk Grub, Tyne Toucan, Tummel Monkey, Willy Gunn, Monroe Killer and Stoat’s Tail.  Mainly fished with floating lines but sinking or sink tip lines can be an advantage in The Wall and AC/DC.