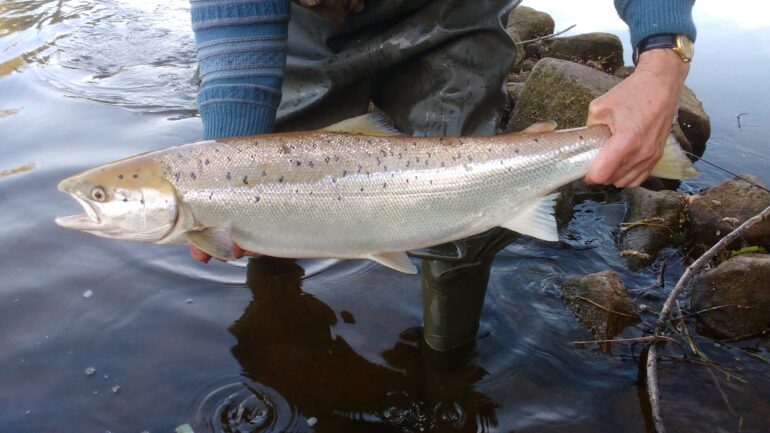 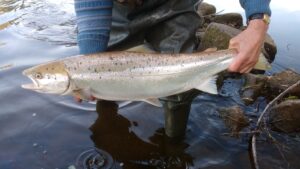 A terrible season and one which we all will be glad to see the back of. It comes along with a tragic decline in the quality of water in the Wye and one which the Club amongst many others is fighting to arrest. This report will not trouble the reader for long but it highlights that poor salmon catches this year are not limited to Ross on Wye AC but reflected up and down the River.

The total number of salmon caught for the whole River this year is a shocking 315 fish, this figure may increase slightly as unaccounted for fish trickle in and not everyone reports fish they have caught. That makes 2021 the worst season for more than twenty years. To break this figure down further the very top of the Wye had about 140 fish, Welsh border to the Lugg 28 fish, our section from the Lugg to Monmouth 18 fish and the lower River had the remainder, 125 or so.

This year the total number of salmon caught by Ross on Wye AC members was a piffling two fish and was it not for Jon Daniels being in the right place having two in one day the Club total would have been zero. Jon caught an 8lb cock salmon on the morning of Saturday 8th May and went back for a hen salmon of 14lb in the afternoon on the same day. Both the fish came to the ubiquitous flying C. Jon lost another fish on the same day, and that as the saying goes was that.

I always compare our results with beats upstream and downstream of us and this year upstream Backney and Foy recorded nil salmon caught and downstream Goodrich Court recorded 5 and Wyebank and Courtfield had 1.

River conditions this year were a reflection of last year to a great extent. We started in March with a good level but without any significant rain the levels soon dropped away and I was reporting a river on its bones by the end of April. There was a little rain in the second week of May which prevented any fishing until the end of the month and then no further significant rain until the end of September in fact the Club closed our waters for about a week due to high temperatures and river conditions in the second half of July. As last year I think these poor river conditions were partly responsible for few members coming down to fish. Our 5 year average in 2020 was 17 but will drop next year to 9.

Because of River conditions angling effort this year was minimal which of course did not help our cause. However three members put in heroic hours of fishing Stephen Green, Richard Woodhouse and Jon Daniels put in many hours of casting practice. Again many salmon members apparently did not fish this season and I think it inevitable that we will lose some members who will not renew their salmon permit in 2022. Thanks must go to Richard Woodhouse for representing the Club at the Wye Local Fisheries Group meetings. At the start of every season I give members the opportunity to sign up to my messaging service, this year all salmon members took up the option and I sent out SMS messages at least once a week during the season to all salmon members commenting on River and fishing conditions.

There is a little bit of work to do over winter. The Salmon hut fence needs renewal and some of the white post stiles in Jackson’s Meadow need replacement.